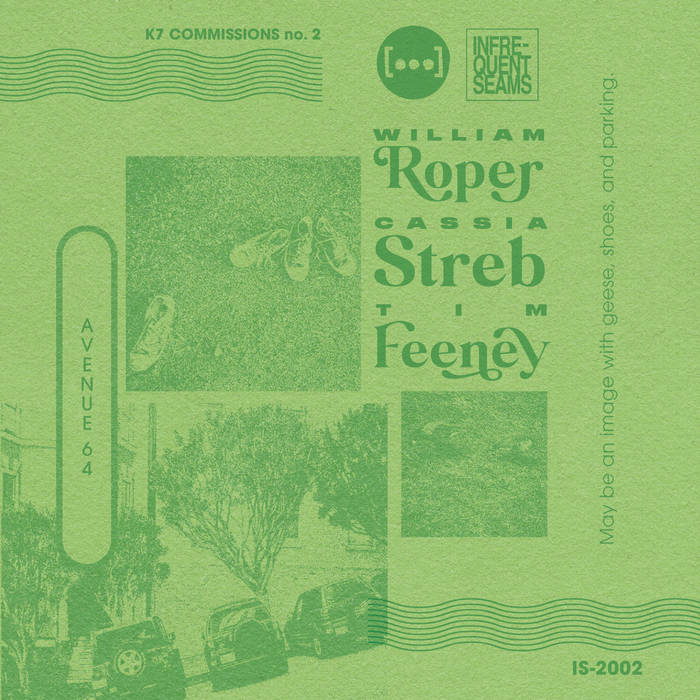 Three Los Angeles improvisers, coming together to freely interpret one another’s compositional systems. Bells, spoken word, wine glasses, viola, tuba, drums, bones, beaks. There is one piece from each artist: A park, a train, and a secondary highway, from Cassia Streb; Another Pattern, from Tim Feeney; The Day Moved, from William Roper.

A park, a train, and a secondary highway, Cassia Streb
Another Pattern, Tim Feeney
The Day Moved, William Roper


Streb:
I wrote this piece as a way of organizing some ideas we generated when we first played together. I took field recordings at three locations near my studio in Highland Park, and graphically transcribed each onto three layers of vellum, so that we could see through the foreground images on the top two layers to the background sounds visible on the last. The field recordings emerge from behind closed doors within the studio, alongside the performers’ interpretations of the images and their responses to the sounds around them.

Feeney:
For a few years now, when on the road I’ve kept a journal that I fill with short ideas for pieces. Occasionally they come together as complete, crystal-clear entities that I only have to hand to a neighbor in order to hear and see miracles; more often they are fragmented, disjointed, or maddeningly unfinished, hinting at small possibilities for making sounds, for layering them in dialogue with one another, or gesturing towards a vague poetry suggestive but incomplete.
Another Pattern is drawn from this collection, using single diary entries as parts realized in superimposition.

Roper:
I was asked if I'd be interested in playing and accepted enthusiastically. It was the perfect ensemble to realize an extant graphic score for an unspecified number of players, i.e. people who understand. The score is a painting. In general, it is about living in Los Angeles, and how you can never be sure about the ground under your feet. In particular, it refers to the Loma Prieta earthquake of 1989.

Bios:
Tim Feeney performs, composes, and improvises sounds and images in and for forests and grain silos, investigating unstable sound and duration. He appears in bookstores and basements with Sarah Hennies and Greg Stuart as the trio Meridian; in galleries and libraries with Vic Rawlings and Annie Lewandowski; in tunnels and train stops with Cody Putman and Cassia Streb as the trio Tasting Menu; in living rooms and warehouses with Clay Chaplin and Davy Sumner; in colleges and museums with Andrew Raffo Dewar, Holland Hopson, and Jane Cassidy; on recordings for Weighter, Intakt, Black Truffle, Rhizome.s, Caduc, Full Spectrum, Sedimental, and Marginal Frequency; and in the occasional festival or concert hall with Anthony Braxton and Ingrid Laubrock.

William Roper is a Los Angeles-based multidisciplinary artist concentrating his efforts in music composition/performance, painting, digital and video art. His primary instrument is the tuba. He also specializes in primitive and ethnic aerophones and extemporaneous spoken word performance. He has appeared as soloist and ensemble member in the Americas, Europe and Japan. His visual work has been exhibited in the U.S. and Europe. Roper heads the record label and arts organization Tomato Sage Consortium. Though he has lived in the same place for three decades, he is always looking for home. http:roperarts.com

Cassia Streb is a sound artist who lives and works in Los Angeles, California. She writes music for specific situations and for special places. Her work is often composed for friends and colleagues in order to highlight aspects of their musicality that she admires. Cassia plays viola, small percussion instruments and found objects in her work with improvisation and interpretation of notated scores. She is a founding member of the Southland Ensemble, a contemporary chamber ensemble dedicated to the interpretation and performance of experimental music, as well as the Koan Quartet, a string quartet performing works by living composers. Cassia is a board member of the Dog Star Orchestra, the curator for Tapetail, a live experimental sound series hosted at Automata in LA, and a co-founder of Music for Your Inbox, a digital concert platform that presents the work of experimental visual and sound artists.