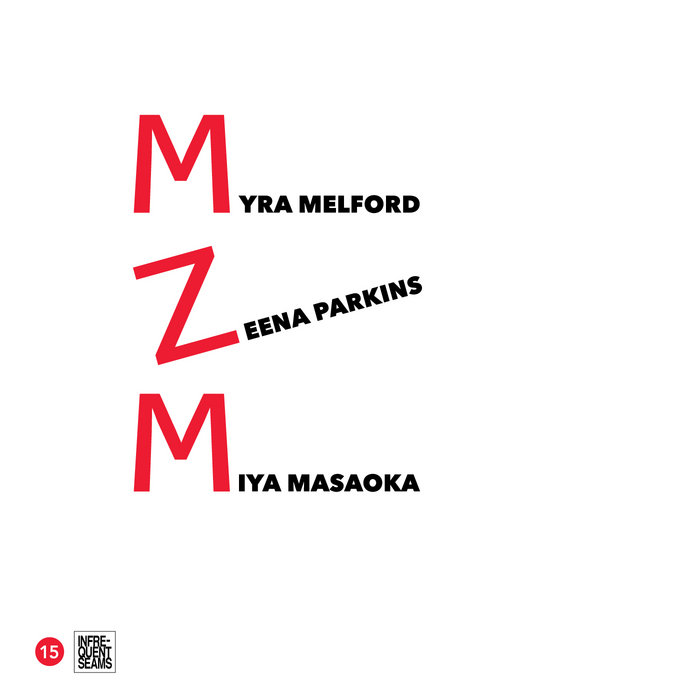 Ten improvised pieces from three of the most innovative instrumentalists at work today, blending harp, piano, and koto with electronic sounds. The new trio of Myra Melford, Zeena Parkins, and Miya Masaoka is called MZM. Each made an indelible mark in the last three or four decades of experimental music, and their improvisations blend together all of the various histories that evolved from their disparate activities. From sound-art to noise rock to modern jazz, are each known both for their extensive output as leaders and their their work with a who's who of adventurous music: Bjork, Nels Cline, Steve Coleman, Dave Douglas, Mark Dresser, Fred Frith, Joseph Jarman, George Lewis, Pauline Oliveros, Yoko Ono, Tin Hat, Christian Wolff, and many others.

In memory of David Wessel, our dear friend and colleague who will never be forgotten.

In improvised music we encounter a space of freedom, which is specific to this music. It speaks to us, wants to be exhausted, forded and explored. The potential of this freedom at hand seems to be borderless and signifying for this form of music. "We search for sounds. We look for the meanings that become attached to sounds. And we have to decide – on the basis of observable responses – on the musical, cultural and social values that reside in whatever configurations emerge. The search is surely for self-invention and social-invention. This is an opportunity to make our world" (Edwin Prévost). It seems to be natural in improvised music, that we are addressed as beings that do not only learn sounds, explore and constellate them, but also define their self- and world- relations. In the conversation of this music, we are not merely preservers of a tradition and members of a self-iterating community, or actors in a fixed play of society, limited to one specific form of life. Rather, as one could say with Hegel, the musician could be seen as an agent of a self-accomplishing skepsis.

But skepsis and change are inscribed into our post-Nietzschean society in a prominent way, which is why we have to ask what else is signifying for improvised music. It seems to be neither the search for new sounds (on its own), which is also a standard modus-operandi of many other forms of music, nor the constitution of a value system and a world picture, which is always the case. If we ask, "who is searching for the sounds, where and how are they shared, how is the search being conducted," it seems that we see a clearer picture. For improvised music it is signifying, that these unique agents, the searching and sounding individuals, are presenting their sounds (and therefore themselves) to a society of the like-minded, after they have asked / while they are asking their instruments about sonic potentials. It is a society of poets who speak with an "idiosyncratic vocabulary" (Richard Rorty), which meets on the basis of their own languages, in a forum of egalitarian discussion. This discussion shows a specific form of openness and acceptance for the contingency of the individual proposals and has an increased degree of acceptance for skepsis. In relation to society, improvised music has to be understood as a utopian project that hints to a horizontally organized, non-hierarchical discourse. It is the courage / the need for skepsis and the discursive play of the individual actors, that distinguishes improvised music. Improvised music is the realm of a hyperbolic constructive skepsis, which, in the words of Immanuel Kant, is asking: "sapere aude.”

If, in the light of this theoretical lens, we take a look at the music of Miya Masaoka, Zeena Parkins and Myra Melford, the courage of their discussion is striking. All three artists have done groundbreaking work in their field and have been important voices in the development of creative music in the last few decades. Every one of them has, as both performer and composer, developed a unique body of work, which contains their individual sonic utopias. Miya Masaoka has found international recognition as a Koto-player, composer, performance-and sound artist. Zeena Parkins is an internationally known multi-instrumentalist, harp-player, composer and improviser. Myra Melford has been internationally successful as a piano player and composer as well. All three have received diverse awards and prizes for their work and have been/are serving as teachers at different highly recognized universities.

It is in the autonomy of the individual projects and the idiosyncrasy of the languages, where they musically debate with each other. In the unfolding discussion, the willingness for parallelism and the heterogeneity of material and ideas, which rest upon a deep mutual understanding and trust, play an important role. The music becomes a forum of exchange between strong individual voices and natural forces, which is resting upon the mutual challenge that the participants are posing to each other. They are addressing the question “Why do we improvise?” in a highly adventurous way. Following a concept of German philosopher Hans-Georg Gadamer, we can understand the musical exchange as a transformative conversation, which is resting upon a constructive reception of the productive skepsis, inherent to improvised music, and is opening the view for a form of life: