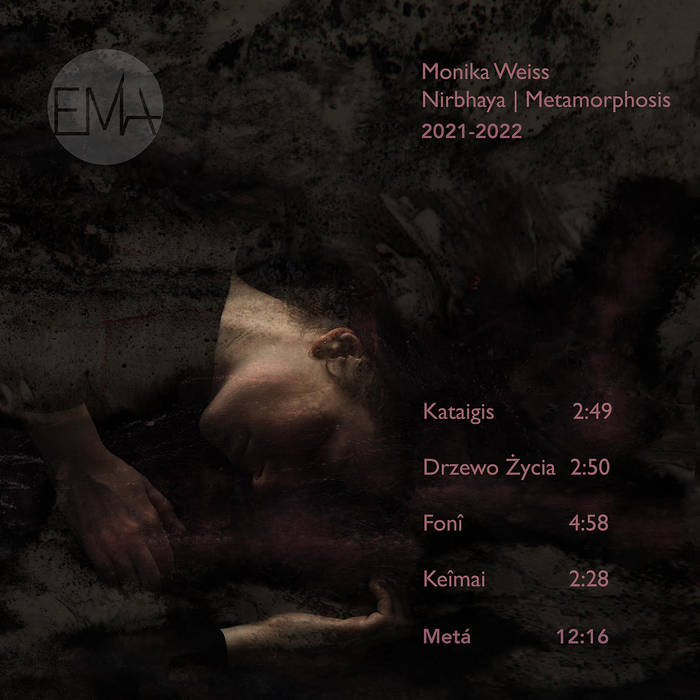 Metamorphosis | Nirbhaya (2021-2022) is a 5-part sound composition accompanied by five silent video pieces. The first four movements are based on the artist’s acoustic piano improvisations, which she later transformed into digitally manipulated layers of sound and mastered as an ambisonic sound environment. The fifth movement is based on the artist recording of several vocalists whose voices were transformated by Weiss digitally and mastered into ambisonic sound. The work is inspired by the story of Daphne, the mythological Nymph who escaped rape by becoming a tree and is part of a larger cycle of intermedia works Nirbhaya devoted to victims of gendered violence. The artist says: “the music evokes the moment in which Daphne’s skin hardens into a tree bark, her voice becomes whispering leaves. The escape from the violence is marked by her death but also by reincarnation into a new life form.” For the silent video, Weiss choreographed and filmed performers enacting slow gestures of lamentation. The artist edited the video to suggest a layered space of almost still yet ever ongoing transformation of the figures, seemingly suspended in spaces outside of specific time or location.

From February 18 trough April 21, 2022, the sound installation will be exhibited as part of Take my Eyes at local_30, Warsaw, Poland. Curated by Agnieszka Rayzacher, this international exhibition is devoted to one of the most urgent problems of the world today, the gender-based violence. In 2022 the permanent ambisonic outdoor sound installation Metamorphosis | Nirbhaya will be installed in a public park at the Centre for Polish Sculpture in Orońsko, Poland, a national heritage institution, and located near the artist’s forthcoming Nirbhaya monument devoted to victims of everyday violence.

Metamorphosis | Nirbhaya has been mastered in EMA Experimental Media Arts and produced by Adam Hogan for the Artist Tapes label, with support from University of Arkansas Fund for Humanities & Performing Arts, School of Art, and the Experimental Performance Research Ensemble.