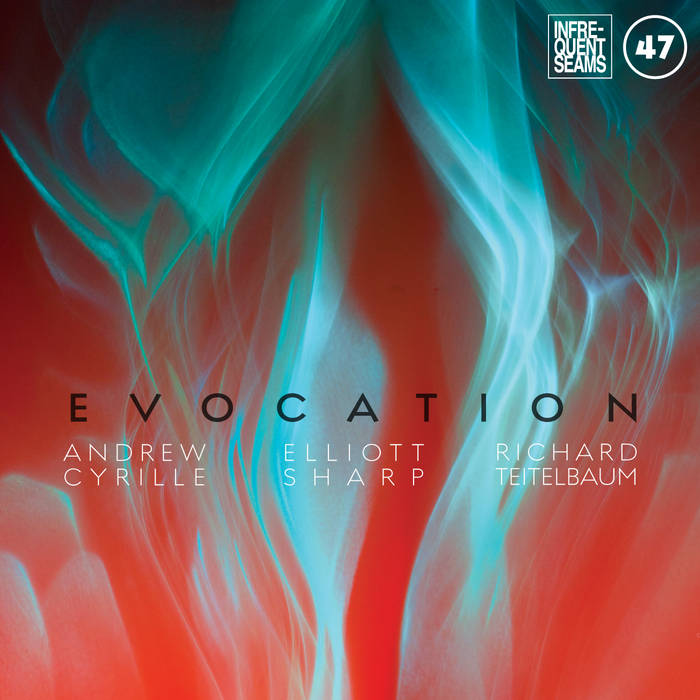 Evocation is what all writing about music must be about and may be the mission of music itself. To create an impression, to summon a memory or tender a suggestion of presence using materials that are not substantially those of the endeavor’s subject – isn’t that the fundamental purpose of any art?

Not to be pretentious or obscure the thing itself: It must be said that master drummer Andrew Cyrille, guitarist-reedist Elliott Sharp and Richard Teitelbaum, the pioneering electronic music composer-performer and pianist, improvised this music on October 13, 2011 entirely in the moment – which is also the best way to experience it now. The three had prior personal associations, for sure, and were alert to the greater world, of course, but they had no necessary intention, expectation or obligation to refer to anything beyond being onstage, right then, as invited by curator-vocalist Thomas Buckner to his Interpretations Series at Roulette, the presenting organization of exploratory music in its first season out of a downtown Manhattan loft to a new, large Brooklyn performance space.

It’s entirely normal that Cyrille, Sharp and Teitelbaum would take the responsibility of performing a set of spontaneous, unpremeditated, aurally focused creative engagement before an attentive audience as an occasion to use their instrumental skills and aesthetic sensibilities to act, feel, think, react. As musicians, to simply be.

“We just went in to have a conversation,” says Cyrille, clearly remembering the concert 11 years after its occurrence. “We were open to what would be brought up by any of the three of us and responding back and forth, like we were talking.”

But not only talking: “Great music comes from great listening,” Cyrille continues. “All music will be good or great if it’s made by talented people who listen. The point is to have it be equilateral, to be able to hear each other and yourself in context of the whole.

“That’s the way I think,” he asserts. “I try to listen and play with and through each others’ music.” Yet few humans can or do respond immediately to anything without registering at least fleetingly
what a given trigger is reminiscent of, seems like or means, to them and possibly to others. This
trio least of all would indulge in anything as glib or staid as programmatic music, which attempts to literally depict a scene or act with sound. Individually and as a unit just this once, Cyrille, Sharp and Teitelbaum don’t seek to represent life so much as to explore and discover how sounds arise from and contribute to it. Of course, they draw on and emit noises we can describe
as to pitch, timbre, rhythm, density and phrase. Those aspects of sound(s) as they manifest here cohere as relatable fragments and even evolve into stories, although whether that’s due to the musicians’ attentions or to the workings of our own subjective minds – or both – is debatable.

To provide some context in which this music emerged (without insisting it be taken into account, and using present tense to emphasize the music exists only that way, documented at its birth and restored to life when listened to): Roulette has an almost square, unadorned hall with a slightly raised stage backed by an arch, facing long rows of basically serviceable seating, capacity 400. Cyrille sits behind trap drums and sometimes stands from them to try the percussive potentials of objects nearby. Teitelbaum, professorially rumpled, seemingly non- chalant, tends a table of keyboards and computers amid wires and cables, within reach of the grand piano. Sharp is shaven-headed, thin, wearing black, strapped with a custom 8-string guitarbass, bass clarinet in a stand, pedals at his feet.

“I also ran a feed to Richard who could then sample my sounds and reintroduce them into the mix, Sharp says. “He did this with Andrew as well, creating a well-integrated conceptual feedback system whereby any of us could recycle our own and the others’ ideas.”

Experimenting with various ways of integrating a vast array of sounds across an equally vast range of modalities was central to Teitlebaum’s practice. He was prominent in electro-acoustic improvisation from the co-founding Musica Elettronica Viva in 1965 up until his death at age 80 in 2020, and had long been a close colleague of Cyrille’s.

Andrew first met Richard preparing violinist Leroy Jenkins’ 1978 album Space Minds, New Worlds, Survival of America. Their partnership resulted in Double Clutch, duets recorded live at Soundscape, NYC in 1981, released in 1997, and the Andrew Cyrille Quartet’s 2016 The Declaration of Musical Independence, which also features bassist Ben Street and guitarist Bill Frisell. Cyrille’s mission, like Teitelbaum’s, has always been to build on traditions by expanding upon them. He’s accompanied jazz institutionalists such as Coleman Hawkins and Mary Lou Williams, and iconoclasts, most notably Cecil Taylor. He’s dialogued with fellow percussionists including Kenny Clarke, Famoudou Don Moyé, Milford Graves and Vladimir Tarasov, anchored Trio 3 with Oliver Lake and Reggie Workman, and driven Charlie Haden’s Liberation Music Orchestra. He first encountered Sharp, a leading personage on the maverick East Village scene, in the early ‘80s, and first played with him at an Ultra Music Meeting in Pori, Finland in 1987.

Much earlier, as a longhaired, heavily bearded music grad student in 1975, Sharp had run sound for a rare Teitelbaum solo concert SUNY Buffalo, New York. “Academic electronic music held no great appeal to me,” he remembers, “but I resonated with Richard’s sounds, which possessed a larger-than-life quality and bubbled with micro-rhythms. I started following him closely in the mid ‘70s after hearing his collaboration with Anthony Braxton [Time Zones]. For decades we’d have congenial encounters at festivals and conferences and speak of playing together, but it took Andrew’s date for the Interpretations series at Roulette in 2011 to make it happen.

“What I love about Richard’s work is his no-hold-barred approach, with his vocabulary freely moving between the abstract and the referential, from synthesis to sampling to prepared sequences to real-time processing to pure acoustic pianism. His setup was that of an improviser, but improvising together with him makes it very clear that Richard is a masterful composer in the Varesian definition: An organizer of sound. He creates a narrative arc that pulls the listener through. I’ve long said that my ethos is to compose with the spontaneity of an improviser but improvise with the sense of inevitability found in a good composition, and I feel that this applied strongly to Richard. It holds true for Andrew as well. I’d been a fan of Andrew’s since first hearing Cecil Taylor’s Unit Structures in 1969, which was a mind-melting experience!”

The experience of Evocation may melt minds, too. Without it conforming to conventions of any musical form, style or genre, it invites today’s listener – whatever day it is – to accept it directly as a brilliantly vivid and varied soundstream, a wash of pure audio sensation. One may be drawn to study the unpredictable but never random intersections and depths of three peoples’ mindful play, or coast on the music’s surface, following the flow or letting it ripple and eddy to shake something loose from our own imaginations.

I hear, in a rush hard to measure in time, exotic birds flapping and cawing, a clarinet squawking, airships landing, cymbals struck, an undertone of foreboding, ringing chimes, a clarion call recalled, crowd noise, echoing gongs. Strings sawed and plucked, stretched and struck. Waves sweeping through sonic fields dense with incident, also transparent and palpably interconnected. Drama replete with conflict, tension, release, resolution and beauty, rising as if from organic processes but in truth stirred up by three conjurers who, thanks to state-of-the-art, customized processing produce something akin to orchestral polyphony. What do you hear? That’s the question.

More context: At the time, news-of-the-day was focused on Occupy, a movement decrying income inequality; 700 protesters had been arrested that week during their march across the Brooklyn Bridge. Steve Jobs had just died, and Siri was introduced. The weather was dry and partly cloudy, in the low 60s.

None of that matters, says Andrew Cyrille. “Influences on what we did? There might have been something extracurricular, but I can’t think what, outside our wanting to play together. And now? I hope someone will hear this and think, ‘Oh wow, listen to what these guys did!’” Such expression will invoke the pure point of Evocation.

Recorded October 13, 2011 live at Roulette Intermedia by Woramon
Jamjod for the Interpretations Series
Mixed and mastered by Elliott Sharp at Studio zOaR - NYC

Special thanks to Hiroko Sakurazawa